Weight is described through the visual presentation of opposing forces. That’s it. Stop here or continue reading for accompanying babble and random thoughts.

Force does not exist in animation. It is implied through posture, path of action, balance, timing, arcs, successive breaking of joints and on and on. It is implied by what the character does. Deciding why a character moves will reveal how it moves. 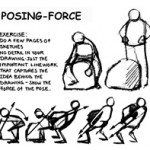 Hold on, this is about weight, not force. No, wait, weight cannot be shown without the visual implication of FORCE. Wait, force and weight don’t exist in animation, there can only be a visual implication. There are two types of FORCE – internal and external.

The Principles of Animation as listed in The Illusion of Life:

Physical:
Squash and stretch – (Compression and Extension)
Follow through
Slow in and slow out – natural (physics), character controlled or mechanical
Arcs – natural and controlled
Secondary action
Timing – the strength of the greater force dictates how fast something moves.

Aesthetic: creates an emotional/psychological response or force in the audience
Staging
Exaggeration
Appeal

Skill and Methodology:
Straight-ahead animation
Pose to pose animation
Solid Drawing – a must for ‘Traditional Animation’ and great for planning

Weight is all in the timing. Well posture and timing. But then context plays a role in why the character moves which dictates how. Ah man, now I’m rambling. Do over.

It’s all in the timing. True, but what are we timing? We’re timing effort or force. How much effort must the character exert to successfully accomplish the task at hand? For an animator, weight is a visual presentation of opposing forces. When a character jumps up, it is actually driving down against the ground. The faster it can drive down the higher it will jump. The character can enhance the power of the jump by thrusting shoulders and arms in the direction of the jump. Study a high jumper or long jumper.

Why does the ground shake when the ‘500 pound’ Incredible Hulk walks? He’s strong enough to jump half a mile, he should be able to tip toe quietly. Ok I’m rambling again. When I read this article tomorrow I’ll probably want to re-word it as I have everyday since starting it and now I sound like Shawn again.

Make sure that the ‘impact’ is visually defined. That could be one goal for showing weight. Watch slow motion live action walking and pay close attention to the impact frames. Going into the impact/compression shows how much effort is exerted to stop the body weight from its downward motion and coming out of the impact/compression describes how much effort is needed to raise the body ‘weight’. Keep in mind, the slower the cadence the more weight shift from side to side there needs to be. The further apart the feet are the more you have to shift weight.

As these following examples are copyright protected I can only direct you to the source. Reference – American History X – Just before Edward Norton is arrested there is a sequence of him walking toward camera. The shot is from the waist up but you can tell what the hips, legs and feet are doing. This is proof positive that you have to animate what is not seen as well as what is in frame if you want it to be correct. Watch a close-up shot of someone’s face as they walk toward you, slow motion is extremely revealing. You can tell when the foot makes ground contact and the leg stops the downward fall of the body.

Balance is extremely important to support the visual implication of weight. Weight must be over or nearly over one foot before the other can be raised while maintaining balance. Weight must shift from side to side in leading the balance during a walk. These examples from The Iron Giant do not address the fact that we may be looking at a directorial decision for mechanical stylization. (See if a lawyer can get through that one).

The timing of a character lifting a heavy object has to be properly blended with the correct posture and balance to describe appropriate effort.

Weight is described through the visual presentation of opposing forces.